I got out in the awesome Spokane spring weather yesterday for my first ride in a couple weeks (April snows and a really bad cold completely de-cycled me). I wanted to try out a new potential bike boulevard and commuting route I’d been thinking about for a few weeks and it looks fairly promising. Originally I had thought that Arthur from 42nd to 29th might be the best candidate for a bike boulevard on the South Hill, but now I’m thinking that Pittsburg from 49th to Rockwood might actually be a better alternative. 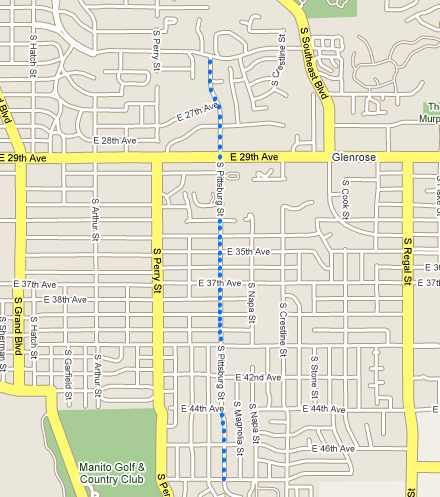 There are a couple reasons I like Pittsburg over Arthur. Pittsburg is a longer uninterrupted stretch and would provide more bang for the buck for riders and the city. Pittsburg’s surface is also in far better shape than Arthur’s pot hole ridden. If you’re going to feature a street as a bike boulevard, it shouldn’t be one with a lot of potholes. Finally, the Pittsburg intersection at 29th is uniquely regulated with two well marked crosswalks and a median forcing cars coming from the north and south to turn right onto 29th. In contrast crossing Arthur and 29th is usually an unmarked adventure in timing and acceleration.

That said, I still think Arthur is a pretty good candidate as well, but it needs to be resurfaced and overhauled. Unfortunately based on a map I looked at last year, I don’t think it’s on the list of roads that will be repaired with bond money in the next several years.

At any rate, whether they become bike boulevards or not, Pittsburg and Arthur will definitely continue to be two of my preferred north south routes across the Spokane’s South Hill. I’m already looking forward to another ride down Pittsburg Monday morning on the way to work.