I was having a nice ride into work Thursday morning until just before the intersection of Sprague and Division. That’s probably one of my least favorite intersections around Spokane because it’s not very bike friendly, especially if you’re not going west or north. 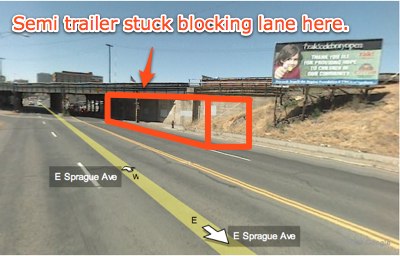 I was headed west with the intent to eventually turn right on Division, but as I started down the incline a couple blocks east of the intersection I noticed that there was a semi trailer with several cars backed up behind it. Without fully recognizing the situation at hand with the trailer (it was stuck under the railroad bridge), I contemplated pulling up onto the sidewalk. At the time I held off because I try to avoid riding on sidewalks and that was the start of my downfall. In retrospect I would have been much better off to just slow way down and get onto the sidewalk via the parking lot entrance of The Edge condominiums rather than waffle and change my mind at the last second.

The semi and cars remained at a stand still as I came up on them, but instead of just stopping at that point like I should have, I decided to keep rolling and bunny hop up onto the sidewalk at the last second. I’m not a technically skilled mountain biker by any means, but I’ve been doing bunny hops on bikes for going on 25 years. I’ve pulled off the same exact maneuver successfully on my bike on that stretch of sidewalk at least a few times before that I can remember. But Thursday I completely failed and my face and left hand paid the price.

My best guess as to what happened is that I forgot that I was still braking with my front brake and accidentally locked up my front wheel as I executed the bunny hop. The second my front tire touched the sidewalk I found myself doing a massive endo that ended with my face and left hand colliding with the sidewalk. At that point I think my bike and I kind of fell back sideways to the ground rather than completely flipping over. My right foot stayed in its toe clip and left me awkwardly sprawled with my bike on the sidewalk.

I was slightly stunned and bleeding quite a bit around my nose, but I picked myself up off the cement and tried to take stock of things. Besides the blood leaking from my face, I discovered that I had a very fat upper lip and a left hand that felt sore around the pinky and ring finger to the point that I wondered if they might be broken. A few experimental flexes of that hand convinced me that I could still ride my bike though.

My bike actually seemed fine for the most part, although the left brake was either bent or slightly rotated from the crash. Surprisingly my Detours pannier was still on the rear rack. Hoping there might be something useful for my situation inside, I fumbled around for a bit with my scraped and bleeding fingers before I succeeded in opening the zipper. Then I realized I didn’t really have anything inside that I could wipe up my blood with anyway so I closed it back up before I managed to bleed all over my work clothes.

At this point all the cars that had been waiting behind the semi trailer had already left. I don’t know if anyone even noticed my wipe out or not because no one asked if I was okay. A guy who I think must have been the semi driver was walking around the trailer, but I don’t think he had noticed my crash either because he didn’t seem to be paying attention to me. I think he was more concerned about getting his truck extricated from the railroad trestle crossing.

I decided I’d better just get into work as quickly as possible so I could get my face and hands cleaned up. I got back on my bike and started pedaling. It made a few new creaking noises I didn’t recognize, but rode fine otherwise. My hand and face hurt, but I wasn’t dripping too much blood so that seemed like a good sign. I had to wait a minute before crossing Spokane Fall Blvd and at least one pedestrian walked in front of me, but he didn’t say anything.

The rest of the ride was pretty uneventful. When I got to work I ran into Dan, the other computer tech for the School of Education, in the alley just outside my building. I asked him how bad it was and he kind of did a double take before saying it wasn’t *that *bad. Obviously I had to see for myself so once I dropped everything off in my office I grabbed some paper towels and headed into the bathroom.

The bathroom mirror revealed that my glasses had created a nice bloody divot in the bridge of my nose and my upper lip was humongous, but otherwise my face wasn’t too damaged. My left pinky was missing a couple good chunks of skin, but nothing a band aid couldn’t cover. Moving my left pinky and ring finger was still very uncomfortable, but it felt more like a nice sprain than a break.

In the end it took me about twenty minutes to get myself bandaged and cleaned up. A couple Advil made the pain in my hand manageable and I didn’t have any problems riding my bike home after work so that was good. I did look like a complete doofus for the last several days while I had a band aid on the bridge of my nose though. I think I’m going to have a visible dent there from now on, but it’s healed enough that I can leave it uncovered. My hand still hurts somewhat, but its definitely doing a lot better overall and has a lot more range of motion. All things considered I’m pretty lucky that I didn’t get hurt a lot worse than I did.