The last few days I’ve been going home via the Erie Street route I figured out last Fall (but never attempted). Its ended up being the shortest, fastest and possibly most convenient route at my disposal for getting across the Spokane River, railroad tracks and one way streets that isolate the U-District from the South Hill. 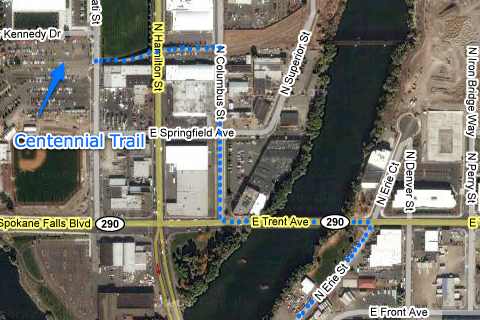 Instead of heading west on the Centennial Trail, go east across the bridge over Hamilton and then immediately take a right on Columbus. Follow Columbus a couple blocks south to Trent and turn left to go east across the Spokane River. Turning left onto Trent is surprisingly easy because there is a median offering protection for people turning left and westbound cars on Trent are pretty good about staying out of the Columbus intersection when the light is red at Hamilton and traffic is backed up. 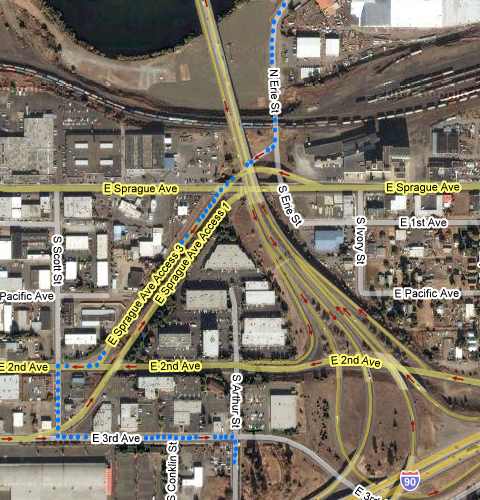 Once over the river you immediately take a right off Trent and onto Erie, a dirt gravel road that runs parallel and far below the Hamilton bridge. After you pass under the railroad bridge you have a couple options. You can either take a right up a paved one way access road that takes you up a short hill to 2nd Ave (and eventual access to Arthur for crossing I-90) or you can pass under Sprague and hang a left on 1st to head into the East Central neighborhood.

I haven’t tried the reverse variation of this route to get down to work yet, but I think I’m going to give it a try tomorrow.  My guess is that it won’t necessarily be faster, but it will provide a slightly shorter route than the other routes I use.