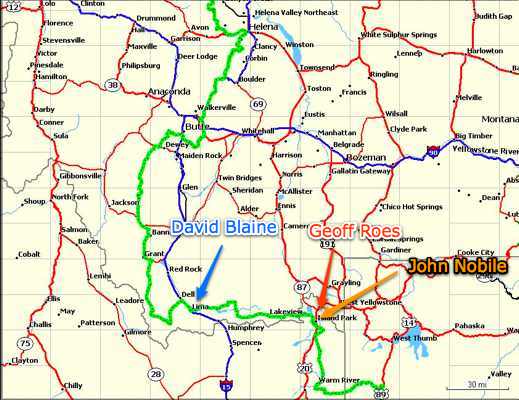 David Blaine looks to have called it a day after he reached Lima shortly after 4PM Pacific time or roughly 101 hours race time (I think- they havent updated the leaderboard yet).  That drops David well off the pace of last year’s winner Jay Petervary, but 140 miles in one day is still a very respectable output.  I definitely like his strategy so far of starting early, riding fast and finishing by mid afternoon.

Interestingly when David called in from LIma he indicated that today was his first day of completely solo riding.  Accoring to their Spot Trackers he was actually relatively close to Geoff Roes at times through much of the day, but perhaps not quite close enough to catch sight of him (or John Nobile who was a bit further ahead as it turns out).  According to the GDR blog John called in from Lima around 12:40PM Pacific Time before continuing on to Island Park and getting there around 8:15PM PDT. Geoff reach Lima at roughly 3:30PM Pacific time, but also pressed on toward the Island Park check in and reached it sometime after sun down.

It sounds like Geoff is feeling pretty strong at this point, but I’m somewhat concerned about John even though he remains in the lead.  Apparently he wasn’t feeling that great at the end of today and given his past history of coming up short in the race I wonder if he shouldn’t play it a little more conservatively for a few days.  Hopefully a good night’s rest will help him bounce back a little tomorrow.

As of tonight four more GDR racers have reached Lima well ahead of the 6 day cutoff market: Rainer Lenninge, Simon Kennet, Carl Hutchings all made it by around 7:30 Mountain Time and Jenn Hopkins rolled in a few hours later around 10:40.  Looks like David may have some company again tomorrow when he heads out of Lima.